Be a responsible dog owner.

Whakatāne kiwi might be in your backyard or just off the trail – training your dog could save a kiwi’s life!  Kiwi aren’t like other birds – dogs find their strong musky smell particularly interesting.  And, without wing muscles to protect it, the kiwi’s chest structure is easily crushed in a dog’s mouth. It doesn’t take a huge hunting dog to kill a kiwi – even a playful or curious bite can damage a kiwi’s internal organs and result in death. Statistically, dogs are the main threat to adult kiwi.

With many of our breeding birds situated within one kilometre of Ōhope and Whakatāne, one loose dog could decimate the entire Whakatāne kiwi population. For example, in Northland between 1990 and 1995, dogs were responsible for 70% of all kiwi deaths in the region. Of the 135 birds killed over those five years, 29 were killed by family pets – some dogs were with their owners but off the lead, and others were roaming at night. 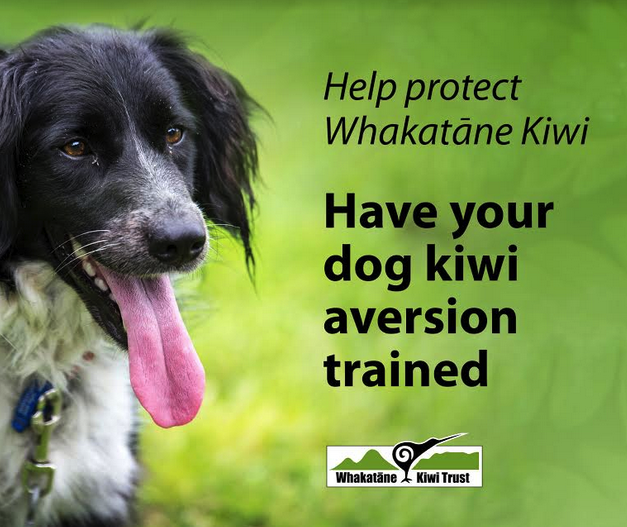 Guus Knopers is the trainer we use for our Kiwi Aversion Training sessions. He is the Director of the K9 Detector Dog Centre and is a very knowledgeable and experienced dog trainer and handler. Dogs he has trained have worked around the world in the fields of conservation, narcotics, explosives and biosecurity.  Guus has been certified to conduct kiwi aversion training in line with the national protocols for this method.

Time: 9.00am start – an individual time slot will be allocated upon booking.

Cost: Koha/donation of $10 per dog – discounts apply when booking more than one dog.

Bookings  are essential! Please register on the link below:

Please note dogs must be older than 6 months to be trained.