The Whakatāne Kiwi Project monitor approximately 40 North Island Brown kiwi in the Whakatāne area. These birds are monitored using a small radio transmitter attached to the upper leg of the kiwi. The signal from the radio transmitter can travel a great distance, birds on Moutohorā can sometimes be tracked from the mainland if they are on the southern side of the island.

A dedicated team of Whakatāne Kiwi Trust volunteers, known as the ‘Chick Pingers’, regularly monitor these birds. They check that the birds are where they should be and what they are up to. The radio transmitters on the adult birds can tell us whether the bird is incubating or not, what time it started moving the previous evening and how long it foraged for overnight.

All of our monitored kiwi are regularly checked to ensure they are healthy and to have a new transmitter attached if necessary. The Kiwi Management Team carry out these health checks with the assistance of volunteers.  The checks are generally performed monthly for chicks and annually for adult birds.

At a health check, the bird will be weighed, its condition, eyes and ears checked, bill length measured and its general behaviour recorded. Even if a new transmitter is not being attached, the current transmitter is always moved to the other leg to prevent excessive wear on one leg. The transmitter is attached to the leg of the kiwi using a combination of a hospital baby band and tape.

The Whakatāne Kiwi Project carry out annual kiwi surveys, rotating them around the three main reserves, Ōhope, Kohi and Mokorua. Whilst the surveys do not tell us an exact number of kiwi in the area, we can use the surveys as an index to how well the kiwi are doing. Each survey consists of a number of listening sites in a reserve and is carried out over a period of four nights. A volunteer records all the calls during a two hour period at each site, the data is collated and an average ‘calls per hour’ is calculated for the survey. An increase in this number provides an indication that the kiwi population is increasing in the area.

Surveys are carried out during the non-breeding season, usually April to June, as kiwi are most active at this time, calling not only to communicate with their partner, but also to ward off other kiwi from entering their territory.

Moutohorā is a pest-free island sanctuary, nine kilometres off-shore from Whakatāne. A population of North Island Brown Kiwi were established on the island as a backup population to the mainland kiwi in case of a catastrophic event.

It is also used as backup area for our kiwi chicks if we have predator  issues in our mainland reserves. Chicks that originate from the mainland return to the mainland once they over 1000g. Chicks that hatch on Moutohorā, stay on the island to sustain its own population.

The Whakatāne Kiwi Trust have an ongoing partnership with local forestry companies, such as PF Olsen Ltd, and provide kiwi management services when required. Trust volunteers undertake briefings to harvesting crews, kiwi survey services, to determine kiwi presence, and monitoring kiwi throughout forest harvesting activity. The Trust has found that working with the crews has been very rewarding and the companies strive to ensure the safety of our kiwi icon. Even leaving small patches of trees within a territory or moving entire skid sites, as not to disturb a nesting kiwi.

After harvesting, we sometimes continue to monitor these kiwi and are currently monitoring four adult male kiwi in forestry blocks in the Whakatāne area. 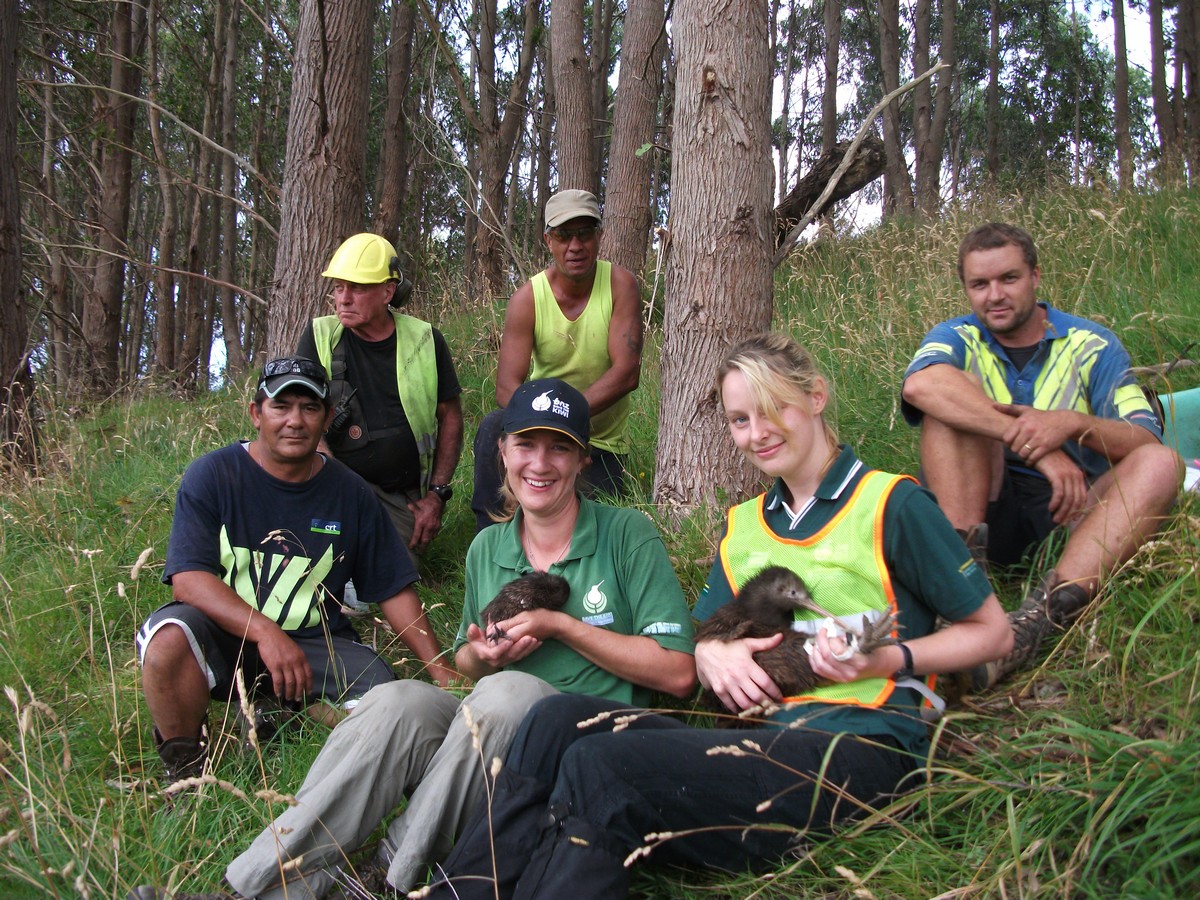 After ten years of using Operation Nest Egg (ONE) as a management tool, the Whakatāne Kiwi Project made the decision to switch to ‘in-situ’ chick management, in 2010. This meant rather than taking eggs to an ONE facility, Kiwi Encounter in Rotorua, the kiwi management team would allow the eggs to be hatched ‘in the wild’.  Chicks hatched in areas without predator control are moved to our ‘core’ areas, such the Ōhope Scenic Reserve, where there is intensive predator control. However, those that hatched within the core areas would be left and monitored, at site.

This of course means that the chicks are susceptible to predation by stoats, however we are consistently achieving a success rate above the 20% required to increase the kiwi population. This success is also reflected in the kiwi surveys which indicate a kiwi population increase in all our ‘core’ areas.